Weather system winds were 5-10mph from NE and temperatures were in the 70s under clear skies; it was a beautiful weekend for sailing. NE winds at Lake Crabtree are affected by the local topography, where they curve around a point of land and tumble over trees near the shore, causing turbulence, unpredictable shifts and holes. These conditions would prevail for the duration of the regatta, challenging every skipper to make the most of them.

Three pairs of seeding heats were sailed under the Odds & Evens format to establish the division of competitors into two fleets, the Championship Fleet and the Silver Fleet, which would sail in rotating order without intermingling. Each skipper’s two best finishes in the seeding heats would transfer to the main score sheet (this is why ‘Race 1’ and ‘Race 2’ show more than one first, second, etc). Following this, one throwout was allowed for each 7 races completed; in the end, each competitor would get only one.

A couple of skippers aired out their B rigs when A sails were briefly overpowered on Saturday, but A rigs were by far the dominant choice all weekend. The races went to those who could sense the ephemeral winds and trim their sails to catch the cats paws and accelerate without stalling or luffing. At the end of the day Saturday there was a tight group at the top of the Championship Fleet: three-time North American Champion Jim Kaighin and TMYC’s Bob Szczepanski, Gerry Cobley and Tom Rummage were all within three points. Another group in the middle was very close too.

On Sunday the Silver Fleet got a good race in with SW winds, but the Race Committee knew this was a temporary condition. Winds went light to nonexistent and the RC decided to postpone the Championship Fleet start until the NE winds we knew were coming had established themselves. Once the wind had settled into the NE, racing resumed with winds a little more consistent than Saturday’s – though there were still plenty of opportunities to gain or step in it, depending on your luck. Once again, those who could put their boats where the wind would fill in, position their sails to catch it just so and play it best when they got it would win. Many races had exciting moments or dramatic finishes when conditions shifted.

The new champion would be in question right up to the finish of the last race as first one, then the other would gain an advantage. In the end, the top four competitors were separated by only five points but Jim Kaighin would rise to the top by one point – and you couldn’t ask for a better competitor. Regatta chairman Rick Ferguson edged out Bill Coates of Charleston SC for the Silver Fleet win. The regatta was characterized by good sportsmanship; there were no DNSs, few DNFs or delays; people did acknowledged fouls and did their turns, and no fouls went to protest committee.

No one went home hungry as TMYC laid on a slap-up local BBQ feed for Saturday lunch, and everyone enjoyed a good dinner and a drink at the Hibernian Irish Pub Saturday night. Every TMYC member contributed to the success of this event, from drinks to food to signage, name tags, organization, you name it. In addition TMYC and RCLNA would like to especially thank Tony Corkell (a full-size Laser sailor but not an RC Laser skipper – yet) who did a superb job as Race Director in challenging conditions, and Elaine Hepkin and Karen Szczepanski who handled the race scoring, without benefit of computers and without breaking a sweat. Finally, we’d like to thank RC Laser North America Class Secretary Dave Branning for his help and advice. We look forward to seeing all our new (and old) friends again at the next RC Laser regatta.

You can click on them individually, or view as a slide show (the best way) here:
http://s177.photobucket.com/user/twotyred/slideshow/RC%20Laser%20North%20Americans%202014?sort=3

Big thanks to Tony Cockrell our PRO and Karen Szczepanski & Elaine Hepkin our scorekeepers. A huge tip of the hat to Rick and the team at Triangle Model Yacht Club for a wonderful regatta experience. 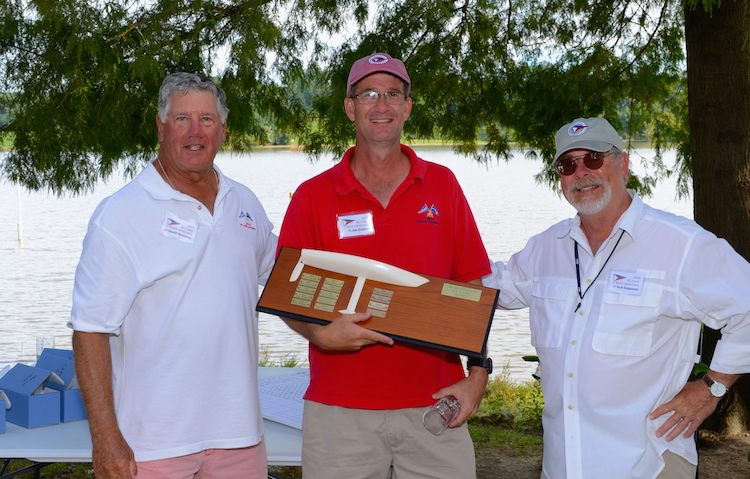