The weather could not have been better for the 2015 Squaw Island Regatta. By 2pm the wind was out of the west at anywhere from 2 knots to 15 knots depending on where you were on the lake. The support staff were all on time and the chase boats were ready. 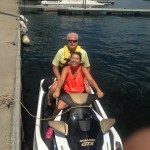 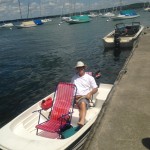 The ideal wind caused us to lengthen the course to approx. 3 nautical miles (Squaw Island and back 1&1/2 times) which took 1 hour and 47 minutes for the winner to complete. And after all that time and distance the first place boat was just 2 seconds in front of the second place boat that was just 8 seconds before the third place boat. Great racing by all!!!!!! Except Jay Niggli who unfortunately lost his keel to the deep blue sea while trying to remove weeds while enjoying a small lead in the race.

The final results were: 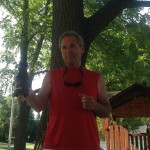 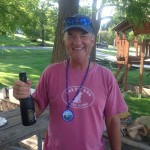 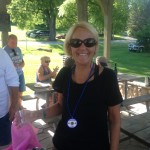 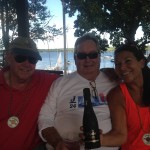 We had Hots, Hamburgs, and Sausage along with all the fixens that were contributed by all to make it a very full filling afternoon. All retired for the day to prepare for the last day of the Summer Series.

It was an exact reply of Saturday. Plenty of wind out of the south had us all changing from A sails to B sails and back. Anne Lambert was able to score 2 bullets out of 6 races which ensured that she would capture first place in the series. Jay Niggli (with a borrowed keel ) was also able to score 2 bullets that insured his second place finish. Finishing in third place was Nelson Habecker (renamed The Rear Admiral).