We reeled off 7 races on Sunday afternoon at Holiday Harbor and Mary Schmidt won four of them. Following close behind her was Gary Schmidt with two wins, three seconds and two thirds. The only other race was won by Bill Schmidt. As one might expect Mary is leading in the Frostbite Series, Gary is running second and Bill is only a point back in third. “Frostbite Results” 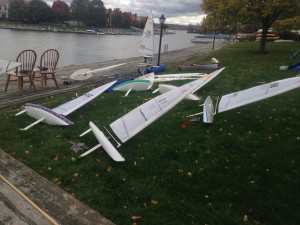 Boats on a prolonged 5 minute break (owners inside)

It was a great afternoon for racing. We had nine boats on the water to race for the day. The wind was mostly out of the north (4-6 knots) which made for a windward leeward course that was free of any weeds. There was not much sunshine so it was asked by many that we take a 5 minute break to warm up inside after four races. I don’t know why it is but a 5 minute break is never 5 minutes. We were actually 15 minutes and ready to get in the other three. We raced until the clock ran out (4PM) and then moved inside for some of Anne’s great chili, Jack’s sushi, and Glennis’ apple pie. There was some chalk talk but I did not hear Mary offering much on her technique.

Next Sunday we will once again be at 423 Holiday Harbor 2-4pm for week three of the Frostbite Series.

AND: Just as a reminder:

You can pay your dues online or offline! Click here.

Thank you for your membership.

See you on the water Sunday.