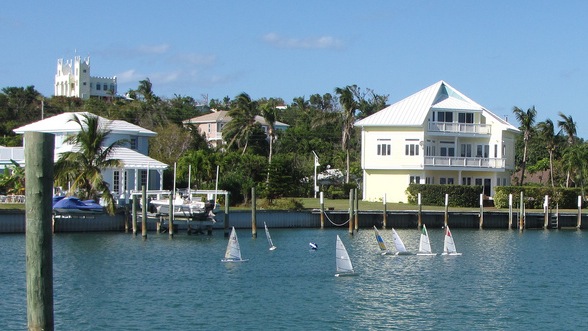 The final round of the RC Laser Tour of Abaco was held in Marsh Harbour at Key’s Landing at Great Abaco Club.

Due to logistical problems in getting to Man-O-War, we decided to postpone 1 week and sail in Marsh Harbour on April 14, 2012.

East to southeast winds were on the heavy side with some knock down gusts and some bows going under, but we all managed well with B-Rigs.

Race1 and 2 were won by Jim Kaighin, followed by a dnf after a rudder servo failed. Randy won race 3 and then had battery problems, but resumed with some 2nds and a race 10 win. Robert won race 5 and then also had a rudder servo fail. Charlie won race 9 and kept his feet dry this week. Anders won race 8, but was edged out by Randy for 2nd over all by just a few points.

Jim Kaighin won the day winning 5 of the 10 races.

We had a great season averaging 7 or 8 boats per event.

We have to give a really big thanks to Lenore Mulock and Ylva Ljungholm in making it to every regatta and handling our race committee responsibilities. We know some of the sailors grumble about being called over at the starting line, but in the end, we all really appreciate your participation.

Also, thanks to the sailors who make it to each event and to those who make it when they can. We have had a few new people involved and hope they will be steady participants in the future.

Next on the calendar is the RC Laser North Americans in Canandaigua, NY June 8-10.