Going into this year’s RC Laser Nationals, I knew the guy to beat was defending champion, Jim Kaighin. Jim had won the Nationals before…not once…not twice…but four times. There were many good competitors, but to win you had to beat Jim.

Day one was quite light. We began sailing with mostly A sails and most competitors changed over to B sails as the day progressed. The first two races did not start off as I had hoped. I missed the offset mark and got a fourth and then wiped out three times and a got a third while Jim came away with two firsts. I felt like any hopes of winning flew right out the window. After that I settled down and sailed much calmer and got four firsts in a row to even it up. After day one, I had a slim lead, but I knew that no lead was safe. You see, at last year’s Nationals, I had a 9-point lead, but Jim was able to come from behind and take the victory.

Day two was slightly breezier and the fleet sailed with a mixture of A and B sails. Throughout day two, Jim and I continued trading the lead many times each race. In several races, we were never more than a few feet apart the whole race. It was exciting and intense racing. In the end, I was able to hold my lead and edge Jim out for the win. Jim was 2nd and Larry Lefczik was 3rd. Congrats to Silver fleet winners Calvin Obara 1st, Bob Piper 2nd and Chris Dingle 3rd.

Looking back at this event, a few thoughts stuck out…

1) I had never sailed the Brawner (Cesspool) method for heat management. I was apprehensive at first, but I truly enjoyed it and found the system to be quite nice to get the maximum number of races sailed.

2) The lake was very nice, but smaller than most lakes I’ve sailed. Because of this, I could not see the wind traveling across the water as I am used to. Therefore, it was helpful to locate other objects around the lake to give telltales of approaching wind shifts. I.E. flags, trees, etc.

3) Just have fun. The harder I tried to win, the worse I sailed. I missed marks by cutting them too close and I put my boat in tight risky situations. I found that when I relaxed and just had fun, the better I sailed.

The Race Officers and the Sun Coast Model Sailing Club did a phenomenal job hosting and running this event. Many thanks to everyone involved. Hope to see you all out on the water again.

The RC Laser NCR was hosted by the Sun Coast Model Sailing Club on March 26-27, 2022. The two-day regatta was sailed at the club’s venue at South County Regional Park in Punta Gorda, FL. 18 skippers signed up and 17 attended. Saturday’s wind was tricky in the morning but filled in for the afternoon. Sunday the wind was much more cooperative and stronger which made for terrific racing.

The Brawner (Cesspool) method for heat management was used on Saturday. Each skipper sailed two out of three races in each group, resulting in 12 races each. All the races were randomly generated on the computer at the beginning of the day and printed and posted on the “schedule” board. Everyone knew ahead of time what races they were in for the day. It all went very smoothly, and we managed to get a lot of racing in. Sunday saw the use of the traditional Gold/Silver split. The top nine scores from Saturday determined the Gold Fleet. The remaining eight skippers made up the Silver Fleet. Sunday saw the fleets alternating, Gold Fleet sailing two races then the Silver Fleet sailing two races. In this manner each skipper sailed ten more races.

In the end, congratulations go to Gold Fleet skippers Barr Batzer (1st) who won the regatta followed by Jim Kaighin (2nd) and Larry Lefczik (3rd). The Silver Fleet was won by Calvin Obara, 2nd place was Bob Piper, and 3rd place was Chris Dingle. Congratulations to all! There was some very exciting racing. It was great to see Barr and Jim match racing and still beating out the fleet.

Many thanks to the race committee with a special thanks to Paul (Slip) Newfield who kept the program moving as RD, Don Ouimette as the starter, Dave Peterson as the finish line judge, Pauline and Ron Lacroix for food, logistics and scoring and all the other SCMSC volunteers without which regattas like this could not happen. Congratulations to all that competed.

Note from the Class Secretary

The class office has a few of each size 2022 NCR T-Shirt to sell. They are a quality wicking T-shirt in sizes Medium, Large, X Large and XX Large. Support the class $18 each includes shipping. 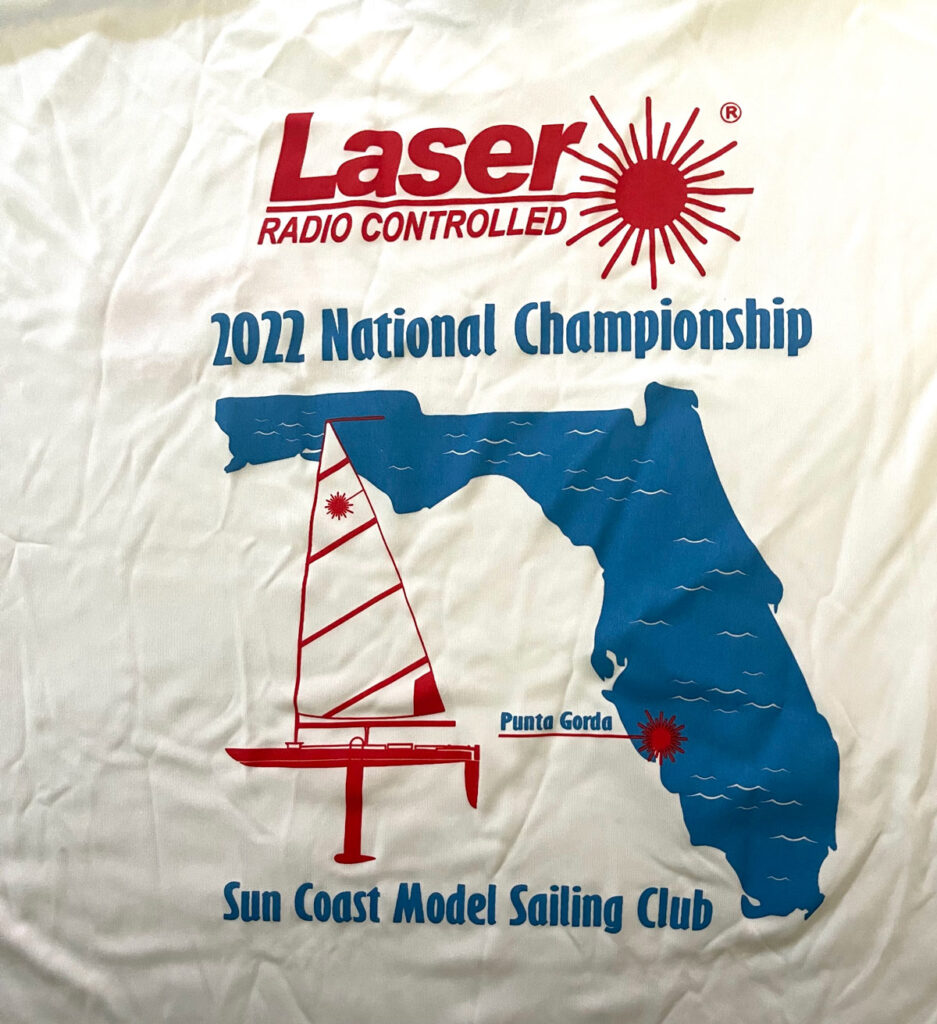