The First Annual RC Laser National Championship is now in the books and a familiar multi time North American Champion, Jon Elmaleh, is the new National Champion. Jon is the owner of Out There Technologies, the owner/builder of the RC Laser and has many years of competing in several RC classes and winning on many levels. Congratulations Jon.

Jon’s victory did not come easy as day one, Saturday,  was a barn burner of strengthening winds and D sails for three quarters of the day causing a lot of up and down race results among the 29 competitors This was the most competitive RC Laser championship fleet on record as the best in the class came to play at the Tred Avon Yacht Club in Oxford, MD. Tred Avon YC is the home base of the Oxford RC Laser Fleet and  has historically been a perfect venue for major events because of the available rc course options as well as  top notch hospitality from the YC staff and flag officers’.

With Saturday chilling winds approaching 25 knots in the afternoon, it became a D-Sail survival test for the seven races. Earlier in the day skippers raced from the B Sail to the C Sail, while many went right to the D sail anticipating boat handling challenges in the building puffs and Tred Avon River ebbing chop. At the end of Saturday, Don Barker, Oxford Fleet Champion, snagged a handsome seven point lead over West River’s Rob Seidelmann who was up 3 points on Jim Kaighin from the Bahamas. Rounding out the top five was Brooklyn’s Jon Elmaleh and West Jersey’s Terry Rapp. Jon was 11 points out of the lead and Terry was 7 points behind Elmaleh. Other top skippers in the lower half of the top ten were Ryan Lippincott, Bob Roe, Roger Vaughan and Jamey Betz. Saturday evening the fleet and guests were treated to a wonderful multi course Tred Avon YC sit down dinner with lots of RC Laser goodies to win in a fun raffle. Laser Sails, sail carriers, electronics as well as logo shirts and other goodies were offered for the guest with the winning tickets. Proceeds were given to the Tred Avon YC Junior Sailing Program.

If Saturday’s fourteen odd/even heats were a survival and boat handling test, Sunday was just the opposite. The blast from Saturday blew out and Sunday turned into a lovely B sail day with 10 knots of a oscillating NW breeze offering appropriate shifts, to keep us on our toes. The last heat was sailed with all A sails as the afternoon sun gave us the warmest part of the Indian Summer weekend. We actually forgot how knuckle biting the day before was. In the race for the Championship, Don Barker was only able to secure 3 top five finishes out of seven sailed and slipped to fourth place in the regatta. Scrambling from fourth, Jon Elmaleh moved up on Rob Seidelmann and the two dueled it out the rest of the day. Jon’s three firsts were the difference as he nosed out Rob in the last race to win the championship by one point. Jim Kaighin had to count a 10th, in an otherwise great Sunday of sailing, to hang onto the third place trophy over Don Barker with Jamey Betz climbing out of 10th place from Saturday to finish on the podium with a 5th place overall.

In the Silver Fleet Harry Henkel, Jim Karr and Dave Branning, all from the Oxford Fleet, were separated by one point going into Sunday. Steve Lang was 9 points back of Branning with Tom Lucke four points back, while Regatta Chairman, Nick Mortgu was 23 points out of first. Sunday was Nick Mortgu Day, as he put together a gallant effort to get to third place in the regatta with a 1,1,3,1,4,3 Sunday Series. Dave Branning, avoiding the Sunday calamity of poor finishes, stayed consistent, and just nosed out Steve Lang for first by five points. Jim Karr nipped Harry Henkel by one point for fourth by winning the last race. I have to mention congratulations to Roger Baldwin, fellow Oxford fleet mate, who won the 5th race of the day, wire to wire, his first major regatta bullet. This regatta had quite a few skippers who were sailing their first competitive regatta and that is always healthy for a growing class. New faces who love to compete and learn from the top guys. Everyone went home with a smile on their face because this event truly had it all, from wild and  and calm racing  to great socializing.

Gorgeous laser cut trophies with a regatta logo were awarded to the top five in the Gold Fleet and the top three in the Silver Fleet. A new RC National Championship Trophy was designed and built with the bow and stern of an RC Laser fastened to the wood trophy base. Note the picture below: 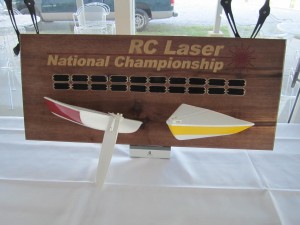 Thanks to the regatta team of Nick Mortgu, Dave Brawner, Ken Shaw, Beth Lippincott, Jim and Margy Robfogle, Dick and Bonnie Richards and the team at Sail RC, our Distributor for RC Lasers. Also to Jon Elmaleh for his support and to all the competitors who came from England, The Bahamas, North Carolina, Pennsylvania, Maryland, New Jersey, New York, Tennessee and, last but not least, our first woman finisher, Theresa Rae Gay from Florida.