Nine TMYC skippers started the New Year in appropriate fashion, racing RC Lasers! The annual Hangover Cup was held at Lake Raleigh on New Year’s Day 2014. The event is traditionally sailed in a different location each year; past venues have included Pullen Park and Meridian Business Campus. This year our inaugural Hangover Cup winner, Bob Szczepanski, generously volunteered to serve as Race Director, a nice gift to the rest of us, and we thank him for an outstanding (as always) job.

It was A-rigs all day, skies were clear and temps were in the 50s so the racing was pleasant. Winds were occasionally in the 4-5 mph range but diminished as the day went on, sometimes to zero. Clear air was important, and making the most of imperceptible puffs and shifts was critical. For the first 5 races we had a good windward-leeward course, but the average wind clocked about 45 degrees for the later races. We could not adjust the course to accommodate, but with shifts and lulls the windward legs still offered plenty of opportunities to capitalize (or not!) on the conditions of the moment. Later starts were challenging with the windward end favored.

Tom Rummage won the first race of the new year, and over the course of 10 races, Tom dominated the scoresheet with 3 wins and 5 seconds; he is the new Hangover champion and his name will be engraved on the impressive perpetual trophy. Raymond Lefrancois gets an attaboy for making his RC boat debut (never sailed one before) in competition. We will see more of him.

While we could have wished for more wind, we had enough – we’ve raced in worse! With low-pressure racing in good company on a nice day, it was a great way to kick off the new year. The order of finishers is below, no throw outs. 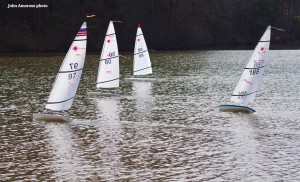 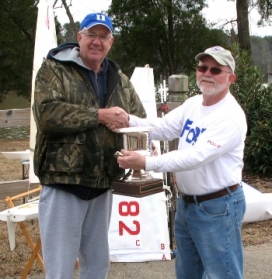 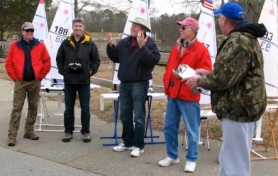 Gerry Cobley, hands raised, is obviously the brunt of some joke. 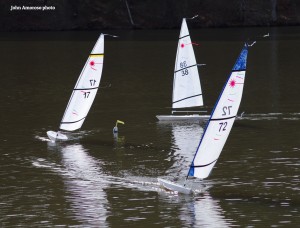 Round Two In The Abaco: Snappas Results