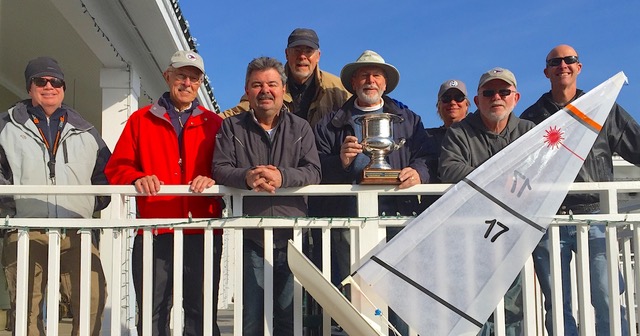 This was the seventh annual Hangover Cup, an informal regatta usually held on New Years Day, in a different location each year; this time we planned it for New Years Eve because the venue, Bass Lake, would not be available to us on Jan. 1. Weather had been bitterly cold and the forecast was the same for New Years Eve; more importantly, the north winds predicted for New Years Eve would have made it virtually impossible to set a windward-leeward course at Bass Lake. The forecast was nice for Dec 30, with WSW winds that would have us sailing parallel to the dock; Dan Stomka suggested we sail on Dec 30 and the fleet agreed.

Sailing started with 6-8mph SW winds in the A rig range, some oscillation but good racing weather. Occasional gusts would knock you down or spin you round so some skippers went to B sails for the next couple of races. But the wind went light and veered west, becoming turbulent as it tumbled over the lakeside trees. Most of us swore we’d never seen such confused wind, and if you got a puff that was consistent for more than a couple of seconds it was remarkable. The fleet was now all back to A sails as the fluky conditions shuffled and re-shuffled the positions.

Each skipper had his moments, but Gerry Cobley consistently handled the confused winds better than anyone else to dominate the results with a well-deserved win. Too bad we will have to disqualify him for use of an illegal battery! (Just kidding Gerry, fortunately the Hangover rules allow LiFe batteries if the alternative is not sailing.) We used our club race procedures wherein the race winner records the finishes of the following boats and calls the start of the next race. Many thanks to Tom Rummage for help placing and retrieving marks and equipment. See you lads next year!