The Triangle Model Yacht Club RC Laser Fleet once again held the first RC Laser regatta of the year, this time at Carolina Yacht Club in Wrightsville Beach, NC. Called the Hangover Cup, this was the fifth running of the New Years Day regatta. Tom Rummage of Garner NC won convincingly despite requiring five attempts to round a windward mark in strong current! This makes the third year Tom’s name will be engraved on the perpetual trophy.

The weather was cloudy but mild for Jan. 1, and wind was in the B sail range and fairly steady; the threatened rain did not materialize. Occasionally a C sail would appear briefly, and those desperate skippers who attempted A sails were severely punished. There were nine boats on the line but the fleet was of exceedingly high quality :-) and the skippers were in high spirits. As far as your reporter could determine, none arrived with a hangover, though a few did make the effort. This regatta is about enjoying each others’ company doing what we like to do most (that would be racing RC Lasers), and procedures are somewhat more relaxed than our usual regattas, if that is possible.

The current in Banks Channel started strong and became substantial over the course of the nine races. The windward rhumb line was about 45 deg across the current. It’s hard to make ground to windward when you’re being set to leeward at about the same speed as the wind! Two windward marks were placed: one farther out in the current, and one closer in to shore by perhaps 50 yards. Which windward mark to round on the first lap was the skipper’s choice, with the knowledge that on his second lap he would have to round the other one instead. This spaced the fleet out nicely and often disguised who was actually in the lead until the final leeward mark rounding.

We started the day with a hearty breakfast at the Causeway Cafe and ended with Tom sharing the winner’s champagne. I can’t imagine a better way to spend New Years Day. We are grateful to Carolina YC for the use of their outstanding piers – it’s a really great place to sail as long as the wind is greater than the current! Light air does not bear contemplation… Wrightsville is a really nice place and I hope we can race there again. Even better, I hope an RC Laser fleet will develop there. They certainly have some good one-design sailors.

I would like to thank Sam and Cothran Harris for paving the way at CYC and for their gracious hospitality, and for the use of Sam’s excellent motor boat (with Sam at the helm) to set marks; thankfully no rescues were required. And I especially wish to thank the lovely Carmen Gaudreault for recording finishes and scoring and generally elevating the level of the proceedings. Finally I’d like to thank everyone who came because you all made it possible for all of us to have a good time. See you next time! 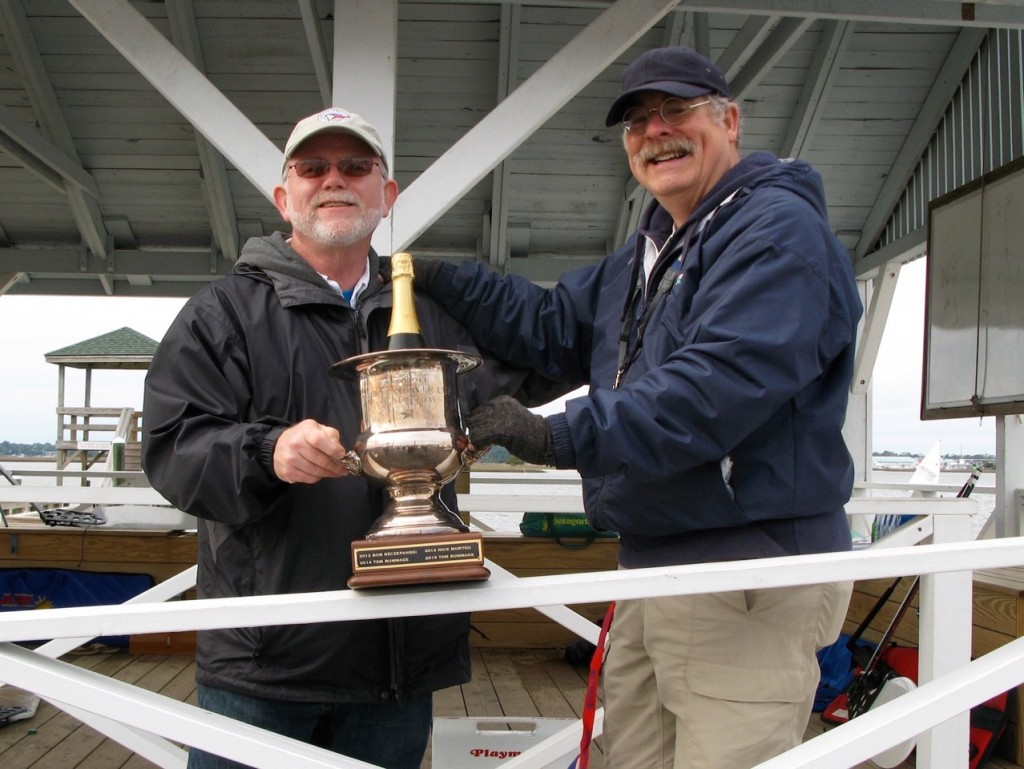