It’s 4:30am 27 degrees outside, I’m driving up the PA Turnpike North East Extension in a light snow. I’m in shorts, a Hawaiian shirt, and top siders. When I get to my destination it will be 10 degrees colder than Riverton NJ. No, not entirely out of my mind! I’m going to what has been named The RC Laser World Indoor Championship. John Whipple from the Lake Naomi RC Laser fleet brings his RC Laser sailors indoor during the winter months. I’m lucky enough to invite 5 guests who have helped me with the RC Laser Class during the year. The rest of the fleet is made up from John’s home fleet.

They set up 11 commercial fans on an Olympic size pool and from 8:00 to 10:30am sail 24 fast and furious races. It’s a blast. John will be doing an article for Model Yachting on setting up an indoor pool and it will be on our class website for any clubs interested in sailing indoor at their local pool.

As usual, the outdoor weather was cold with passing snow squalls – typical of the Pocono Plateau in the winter. Indoors, the weather was 80 degrees and humid, under slightly fluorescent skies, with gentle easterly winds. It was perfect for our ‘A’ sized sails.

Pool sailing is very demanding in terms of utilizing the limited space. Yet we like to have as many skippers sailing as possible. Out of 10 invitations extended for the event (evenly divided between local fleet members and Nick’s gang of off-lake skippers) we had nine skippers. Since a start with 8 boats is crowded, but manageable, we use a system of randomly excusing a few boats each race, the cesspool system. The result is that everybody sails two of every three races.

Each race is two and a half laps of the pool. The start line is towards the leeward end of the pool and we use the windward marks as the finish line. The result is that there is a fresh start about every five minutes. This includes time to be sure the right boats are in the pool, a minute-long start sequence, and the race itself. Since we need to do a multiple of three races, we typically end up doing 24 races for each regatta.

When all was sailed and done, Jamey Betz, the perennial winner and favorite won the 2020 World Indoor Sailing Championship. The skippers in order of final standing were (with tie breaks):

Many thanks to the Club Management for their support of this endeavor. Sue Neely (Primary Race Officer) and her crew of helpers (George Radoczy, Fran Whipple, Eileen Daggett, Stephanie O’Sullivan, Beth Lippincott, and Claudia Stoudt). 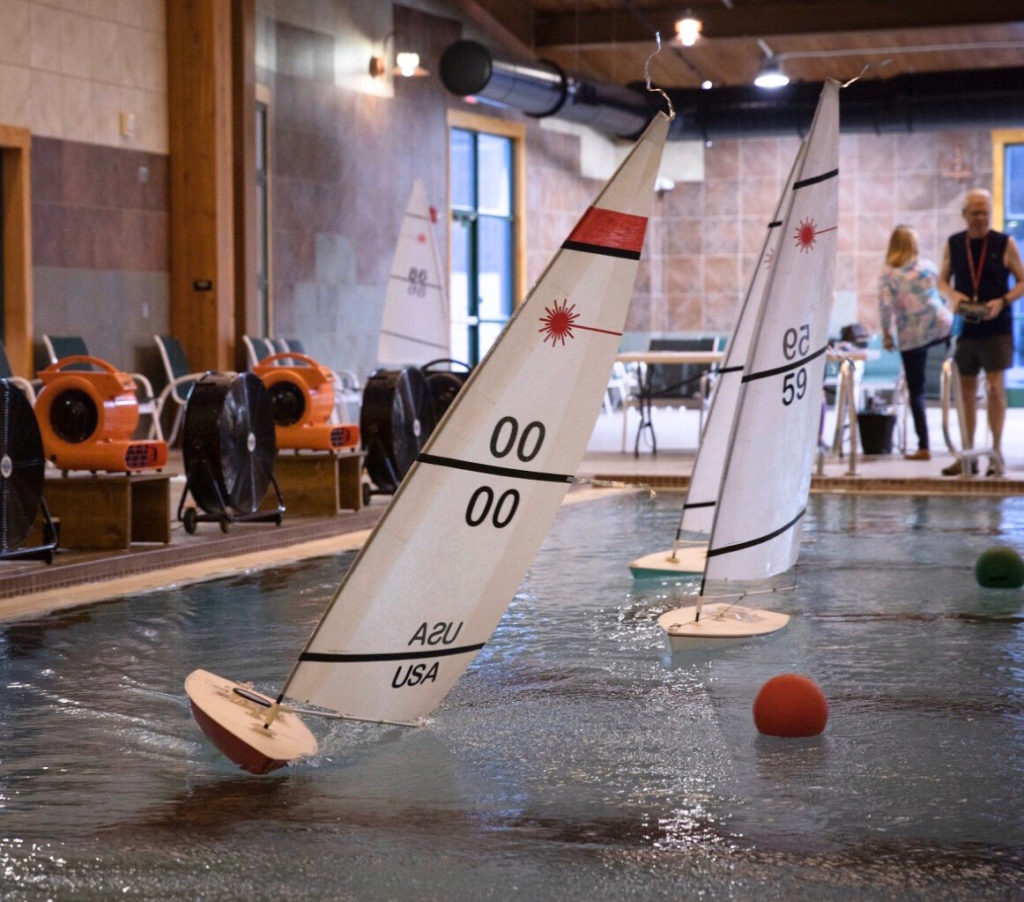 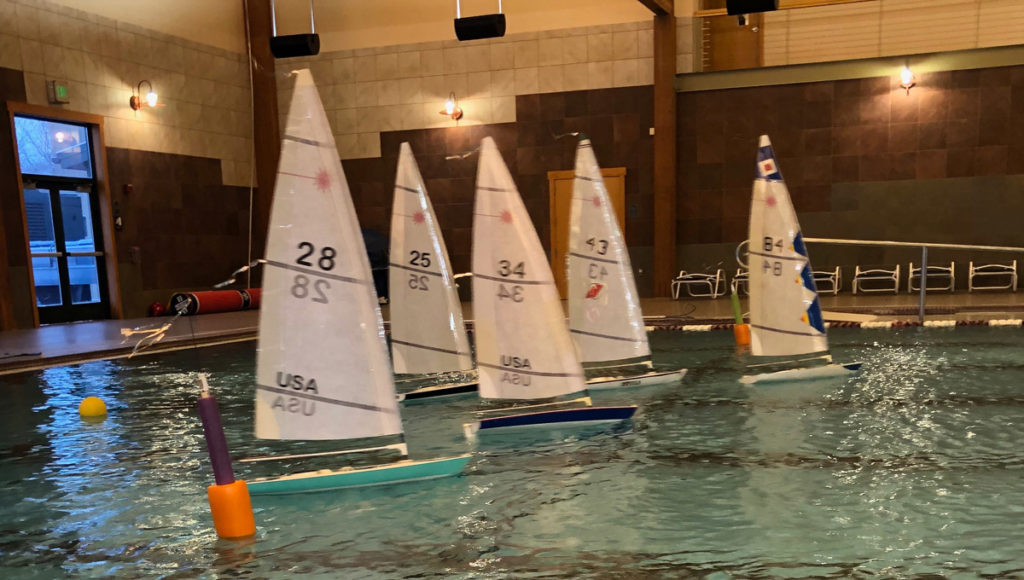 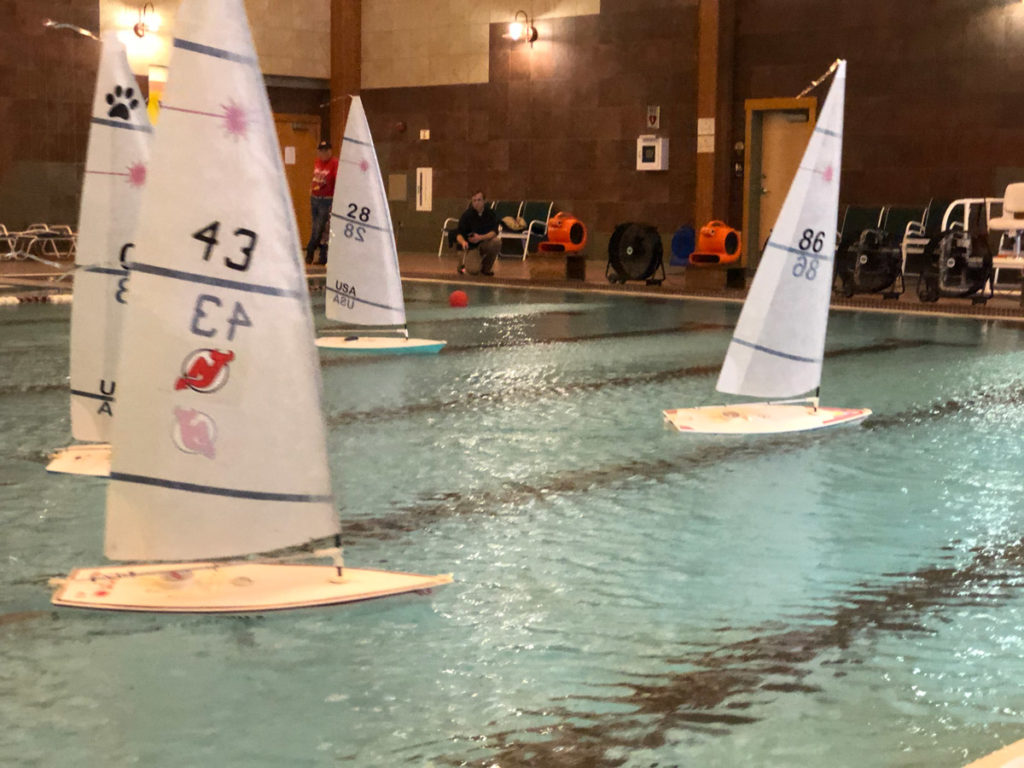 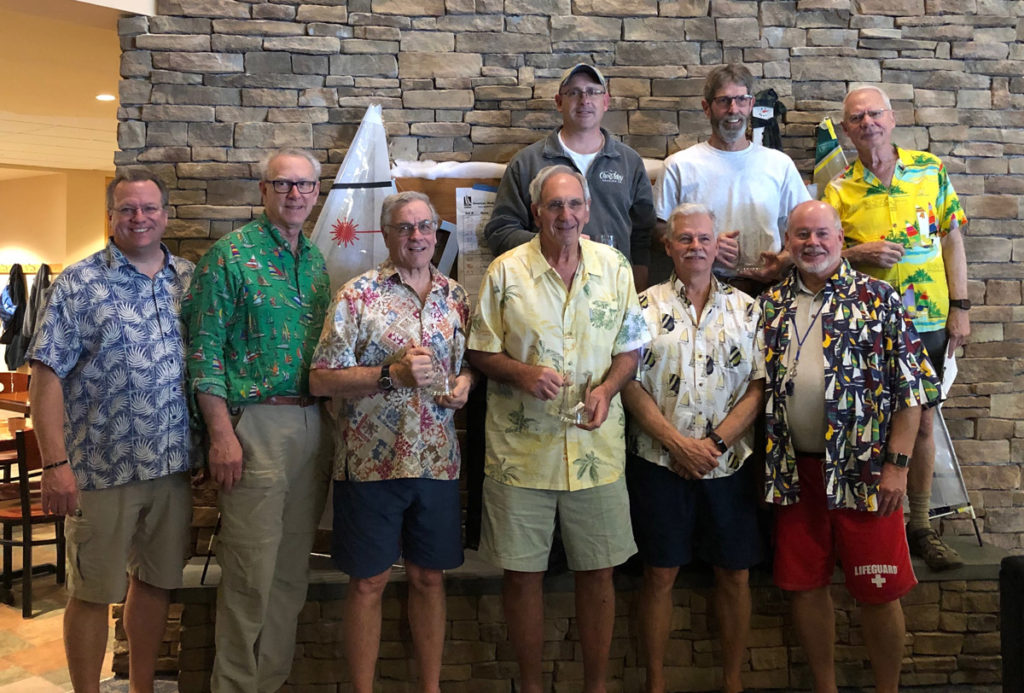