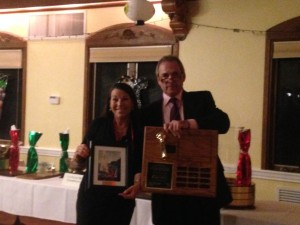 And… it led us to another Great Night of celebration–
We closed the 2015 Sailing Year in Style once again.

Anne Lambert was able to hold off Jay Niggli by 7 points to win the Overall High Point Series for 2015. Her commitment to racing and attendance was unmatched.

The evening was filled with 1st place awards going to Jonathan Gorbold first in both the Frostbite and Fall Series, the Spring Series going to Terry Schmidt, and the Summer Series going to Anne Lambert. 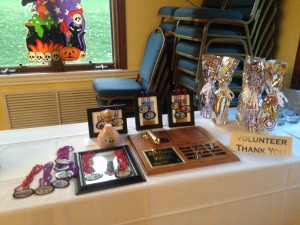 We wasted no time in turning the page to the 2015-16 series by having our first day of competing for the Frostbite Series the next day.

It was the proper way to start, having temperatures in the 30s’ and a brief snow flurry at times. You would have thought by looking at us that we were going skiing instead of sailing. But not so! We were able to get off 5 races before we all took shelter back at the picnic tables where there was hot coffee and not so warm wine. 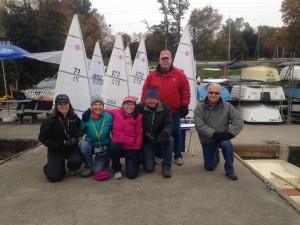 The day belonged to Mary Schmidt and Jack Bennett (with refurbished transmitter) who traded firsts and seconds 4 out of five races. Determined to also be recognized was George Nix pulling a win out of his hat.

and actually do begin skiing. But till then the next meeting will be 2-4pm (Sunday Oct. 25) off the boardwalk at Holiday Harbor for a change of scenery if the wind conditions are right.