The 2014 RC Laser National Championship was held, once again, at the Tred Avon YC in Oxford, MD. This is the fourth major RC Laser Championship to be held in Oxford since 2007. Twenty six skippers from the Bahamas to Alabama to Texas to New York to North Carolina and point’s in-between came together in gorgeous fall weather for the most star studded championship in RC Laser history. National champions from at least 5 other RC Classes chose to buy and borrow RC Lasers to make sure that they attended this first-class annual event. For many, the RC Laser has become the boat to easily rig and race with the best in the country. The winner, Stevensville, Maryland’s, Dave Ramos, has basically put his signature on five RC class championships this year, winning three and placing second in two others. He has sailed an RC Laser about 3 hours prior to this weekend, a testament to his prowess in this sport.

The weekend started with practice on Friday afternoon in fresh breezes and most, who attempted to practice, used the C and some B sails to test the conditions which included westerly winds and a slight flood tide off the floating docks of the Tred Avon YC. After the practice session the YC hosted us to a private party in the upstairs bar room and we all got to enjoy some new and old friends.

The regatta format for 26 boats, as administered by Race Director, Dave Brawner, was to use Saturday as a seeding day by sailing a round robin of heats that allowed all competitors to eventually race against every one multiple times with one throw out for the day. The fleet was then separated into the Gold (Championship) Fleet and the Silver Fleet for Sunday. On Sunday, the Gold Fleet raced two heats and then the Silver Fleet raced two heats which continued back and forth throughout the day. It’s just a faster system and can allow more heats to be executed. In all we sailed 16 individual heats on Sunday and the winds stayed from the northwest but played with us between D, C and B sails all day. On Saturday we did use the A sail for part of the day but by Sunday we enjoyed freshening westerly breezes that kept us in the D and C sail for most of the afternoon.

After Saturday, Dave Ramos held a 9 point lead over Middletown, Delaware’s, Mark Reinhart and a 11 point lead over defending champion, Jon Elmaleh from Brooklyn, NY. Close to Elmaleh was Jim Kaighin, from the Bahamas, and Ron Stephanz from Alabama. On Sunday, RC Laser newcomer, Mark Rinehart, showed some great sailing on Saturday but developed some back problems on Sunday and was not able to sail after lunch. Dave Ramos kept his 9 point lead throughout the day with a couple of bullets and other top three finishes to win the championship. The always consistent Jim Kaighin moved into second with 2nds, 3rds and a 4th to edge Jon Elmaleh by four points. Jon had two firsts and two seconds on Sunday but had to count two 7ths and a 5th and that was enough to keep him from improving on Kaighin and Ramos. Rounding out the top five was Ron Stephanz, in fourth, who won three races on Sunday, and Rob Seidelmann, in fifth, who was second in this championship in 2012.

In the Silver Fleet, Barnegat, New Jersey’s, Harry Mote, sailing in his first RC Laser regatta, held his first place from Saturday to win it all by four points over fast improving Mike Roberson from Raleigh, NC. Dave Betz moved up from 4th on Saturday to grab third, six points behind Roberson. In both fleets 4 different individuals won heats on Sunday. The biggest movements in this fleet on Sunday was from Hank Buchanan, who moved from ninth place to 4th place with three heat wins. Victor Oberg also liked the fresh breezes and moved from 8th to 5th on Sunday recording a bullet and five top five race finishes.

A huge thanks goes to Nick (and wife Beth) Mortgu, who packaged great a TAYC venue with perfect meals, beautiful weather, great skipper gifts & prizes as well as friendly competition throughout the weekend. Saturday nights yacht club banquet was first class with steak or crab cakes and lots of Chinese Auction donated gifts. A standing ovation goes to PRO, Dave Brawner, and his team on the dock of Ken Shaw and Skip Hall and his support boat operator, Dick Richards and his wife, Bonnie, who provided the scoring from the finish line to the scoreboard. This team is one of the best in our sport.

On an administrative note, we were able to meet Ray Seta and Ron Stephanz who will become the new AMYA President and Vice President in January 2015. Ray came all the way from Texas and Ron from Alabama to participate in this event.

Here are Jim Flach’s and Skip Hall’s pictures from the weekend:
http://regatta.smugmug.com/2014-RC-Laser-NCR/ 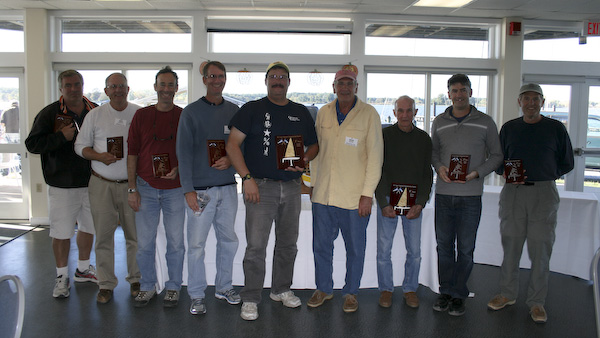 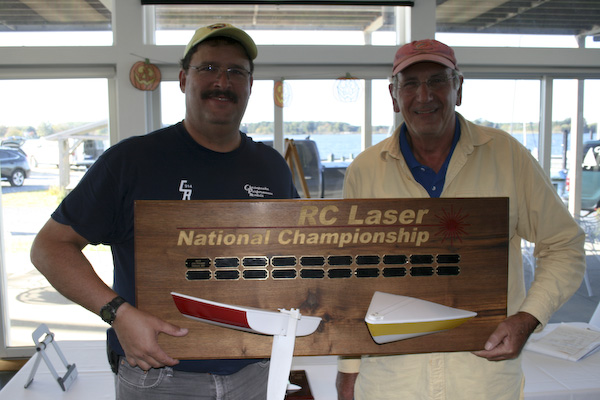