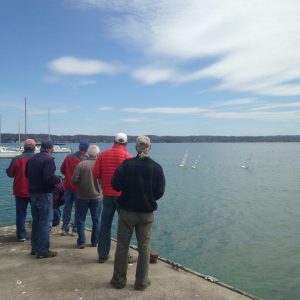 We had 7 races Sunday afternoon which shuffled the deck in the standings for the Spring Series. Jack Bennett, who had a win, a second, two thirds, and two forths, was overtaken by Jonathan Gorbold who dominated the races with five wins. Click “RESULTS” for all the scores.

The wind, while sometimes rotating 180 degrees, was present most of the time at 5-7 knots which made for very good “A” sail racing. The marks were perfectly positioned so that at times it was a windward leg in any direction. We did attempt an east/west course for one race with the wind coming from the west which lasted for two legs of the race and then switched back to the north or east depending on where you were on the course. As luck would have it Barb Urich and Len Redon managed to get tangled up boom to boom with the wind coming from the north which made for a great deal of rowing to rescue the two of them heading to the south end of the lake.

Next Sunday will be week 5 of our 8 week series with the start time being 4pm off the south dock at CYC. I hope to see everyone there again for another fun filled afternoon of frustration.