from Rick Ferguson and Dave Branning

Rick Ferguson and Tom Rummage were kind enough to come north from Raleigh for the Tilghman RC Laser Regatta this Spring so I thought it proper to support their Regional Championship this year. Elaine Hepkin (traveling scorekeeper) and I ventured south on Friday to join 12 local skippers from the Triangle Model Yacht Club at Lake Crabtree near the RDU Airport for this one day Region 3 Championship. The club and RC Laser Fleet 27 hosted the aptly named annual Hot Dog Regatta on Oct. 5, 2013, Upon arrival at the lake it was obvious that we were going to wait a while for wind as the entire lake was like a mirror. A little after 10 am the first ripples began to build, and then fade, and then come back, but we began a series of “here’s the wind, so let’s start a race.”

With the exception of a few puffs (one could count them on one hand), winds were mostly zero gusting to 1 or 2 mph, unusual for this location at this time of year. The wind (a loose term) direction shifted throughout the day, challenging the race director to set courses.  By mid-afternoon it settled mostly to the south, making for a less than ideal start area and a straight out distant windward mark, testing not only skippers’ light air skills but also their patience. A big kudos goes to Rick Ferguson, who not only stayed on his toes to create a fair course, but he also had to keep track of his boat as it floated around unattended. This was one of those regattas where at some time during the race the course would be perfect.

Gerry Cobley opened up the day with three bullets and a 5th. Dave Branning goes 3,2,2,2 and Tom Rummage goes 11,3,2,1, After  lunch the tide shifted for Gerry and Tom. Tom posts two firsts, two seconds and two thirds while Branning holds onto second with consistent finishes while Gerry had to deal with counting two fourths and an eighth in the closing races. Carl Olbrich stayed in the mix and he rounded out the top four who distanced themselves from the rest of the fleet. Tom Rummage is the Top Dog again. Engraved glasses were also awarded to the top three finishers at a hot dog cookout after the races. .Anchor man, John Foust, received a copy of Dr. Stuart Walker’s “The Tactics of Small Boat Racing.” Thanks, of course, go to Rick for running the regatta and RC duties with assistance from Elaine Hepkin for scoring, and the Triangle Model YC team who made the social part of the day so much fun.

This is a lively and growing RC Laser Fleet contained in an active AMYA RC model yacht club. Four skippers are coming to the first RC Laser National Championship next month in Oxford, MD. Several Triangle skippers sailed in their first RC Laser regatta performed very well under the circumstances. TMYC has the makings of a solid and growing Laser fleet and we hope to see some RC Laser action in the surrounding states in the near future. This was a regional regatta, and we hope to see some more guys from the southeast participate more often. 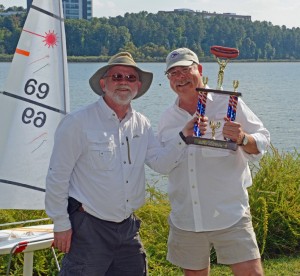