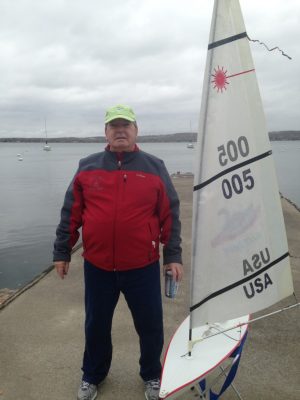 It was one eyed Jack aka Captain Jack Sparrow aka Jack Bennett who led the way by posting 3 wins a second and a third to capture first place after seven races were completed. Anne Gorbold scored 2 wins, Jonathan Gorbold and Maggie Atkins each with one. “RESULTS”

Although it was a chilly day everyone was dressed with layers ready to fight the elements with the exception of myself. After two races I called for a 10 minute break to warm up my rudder thumb. The wind was out of the south which made for a great course (walking up and down the dock) to get our exercise tuning up for next week’s “Walkabout”.

We have partnered with “Raceqs” (a GPS phone app) to broadcast our walkabout races live or for your review after the races by clicking on the following link: http://raceqs.com/regattas/50548. The scheduled time for the first race will be promptly at 2 pm 423 Holiday Harbor, so don’t be late or you will have a hard time trying to catch me.

Richard Mikulec, a new member this year, joined us with his Victoria RC which at times got lost amongst all the “A” sails of the lasers. It will be interesting to see how he fairs in a longer race if he joins us for the Walkabout races.

The weatherman calls for sunny with a temp somewhere in the 60s so dress attire can be shorts if you wish.

Until next Sunday 2PM