Just as forecasted the rain clouds retreated and the sun broke through occasionally for our afternoon of racing. With everyone using “C” sails it was not uncommon to see boats pitch poling when trying to fetch the leeward mark. After having to rescue two boats hung up on the other side of the dock due to the strong gusts of wind that would pin your boat there, it was decided to move the mark rather than have to do another rescue. George Nix had a rather different approach to combating the 25+ knot gusts. He tried starting the fourth race with his “C” sail reefed by allowing the top half of his mast to separate from the bottom half which doesn’t work very well. (One more rescue.) 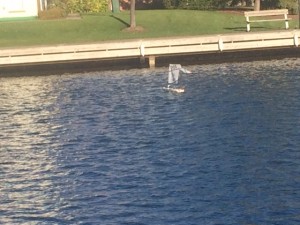 We were able to get in six races using a modified Olympic course and a one race scramble lap windward – leeward-finish before time ran out.

We then moved inside where we devoured Terry Schmidt’s lasagna, warm bread and cupcake desserts. Upon finishing with a glass of wine or two some of us just laid back and took a snooze until woken up to go home.

We will be trying to repeat the same scenario again this Sunday with racing from 2-4pm at Holiday Harbor and more of Terry’s lasagna.